Our senses keep us plugged into reality. They instantly create a connection to the present. Paying attention is the only way to experience this moment in life. If you’re feeling distracted, panicked, or out-of-touch with reality, try taking time to intentionally notice the things that stimulate you. Note-taking and blogging is a great way to do that.

Writing about how the world seems through your own particular lens fosters mindfulness and appreciation. It keeps your mind grounded in this realm. Journaling is an important ritual that I practice daily, but it is hard to take note of and digest everything that happens in our lives. Doing it here is a way that I can highlight the stuff that has truly touched me.

In diaristic fashion, I will periodically take note of the things I saw, heard, felt, smelt, read, or otherwise consumed. This will give me a chance to share (and keep track of) the things that I love.

Something I saw: The tallest waterfall in New York State. This summer, I drove a few hours north from NYC to Ithaca, NY. It’s a city known for its gorges, cut into stone by natural running water. 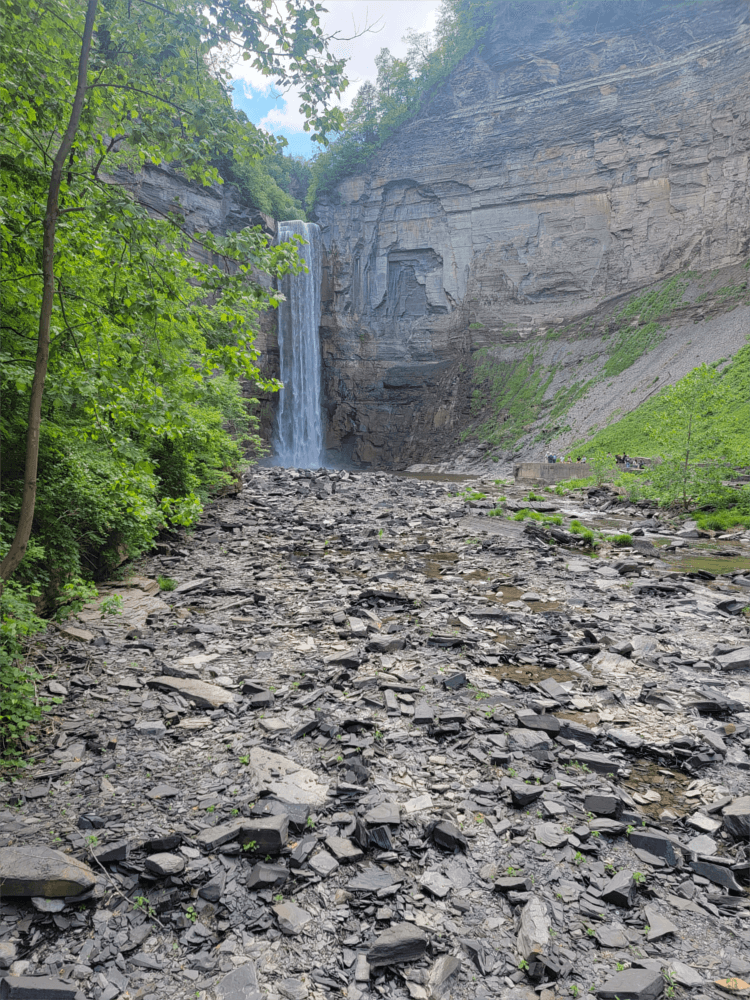 It was a short hike (maybe twenty minutes) through Taughannock Falls State Park to get this awe-inspiring view of nature. 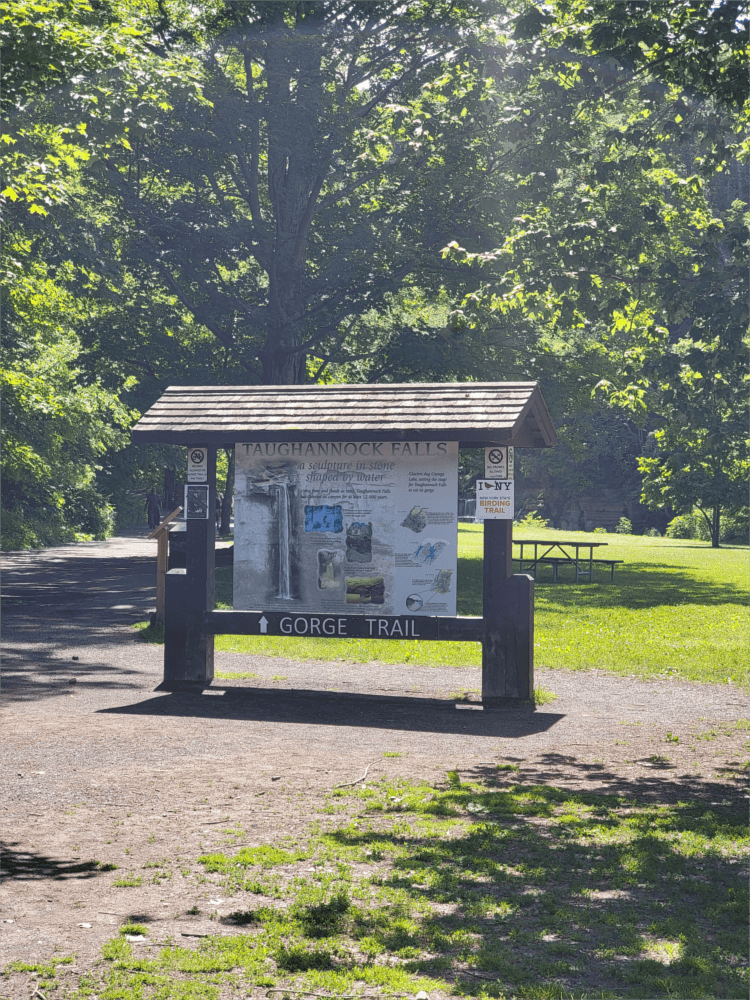 Something I read: Catching the Big Fish: Meditation, Consciousness and Creativity by David Lynch. David Lynch is a filmmaker and artist. He discusses his development of ideas in this book and likens the process to catching fish:

The beautiful thing is that when you catch one fish, even if it’s a little fish—a fragment of an idea—that fish will draw in other fish, and they’ll hook onto it.

Lynch explains how meditation had helped him overcome the depression that gets in the way of creativity, “You must have clarity to create“. 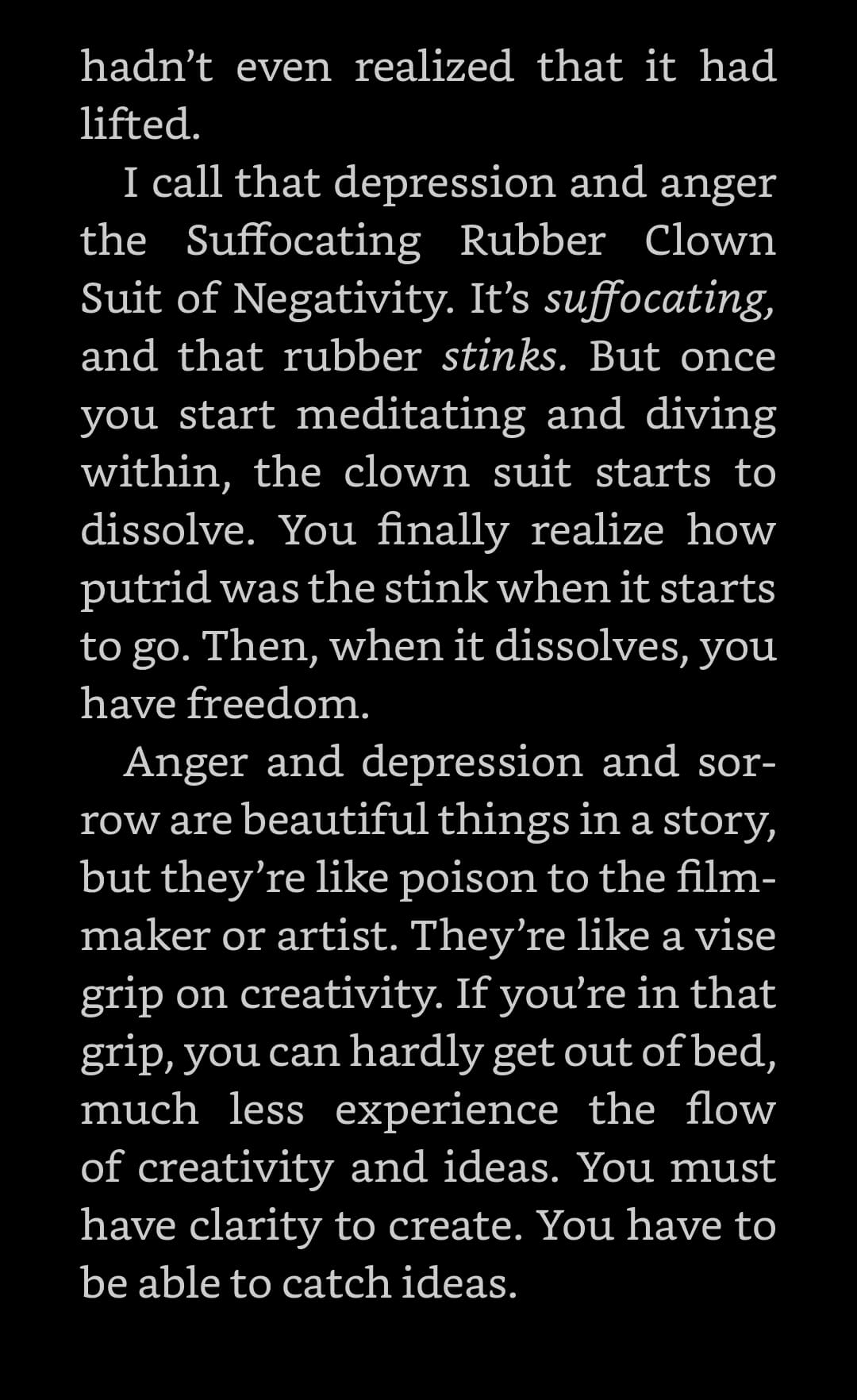 Something I ate: I live in New York City. I eat a lot of good food. But, this culinary experience happened in Illinois this summer. I ate at the famous Lou Malnati’s Pizza in Chicago. 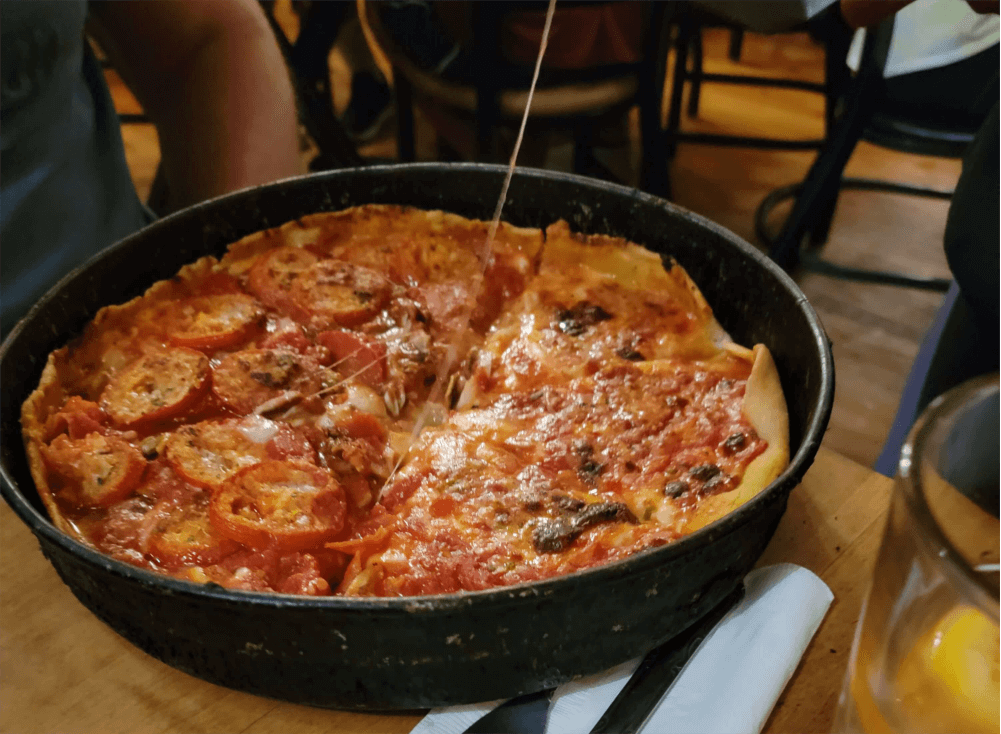 Deep dish with a few toppings hit the spot, washed down with a cold beer. 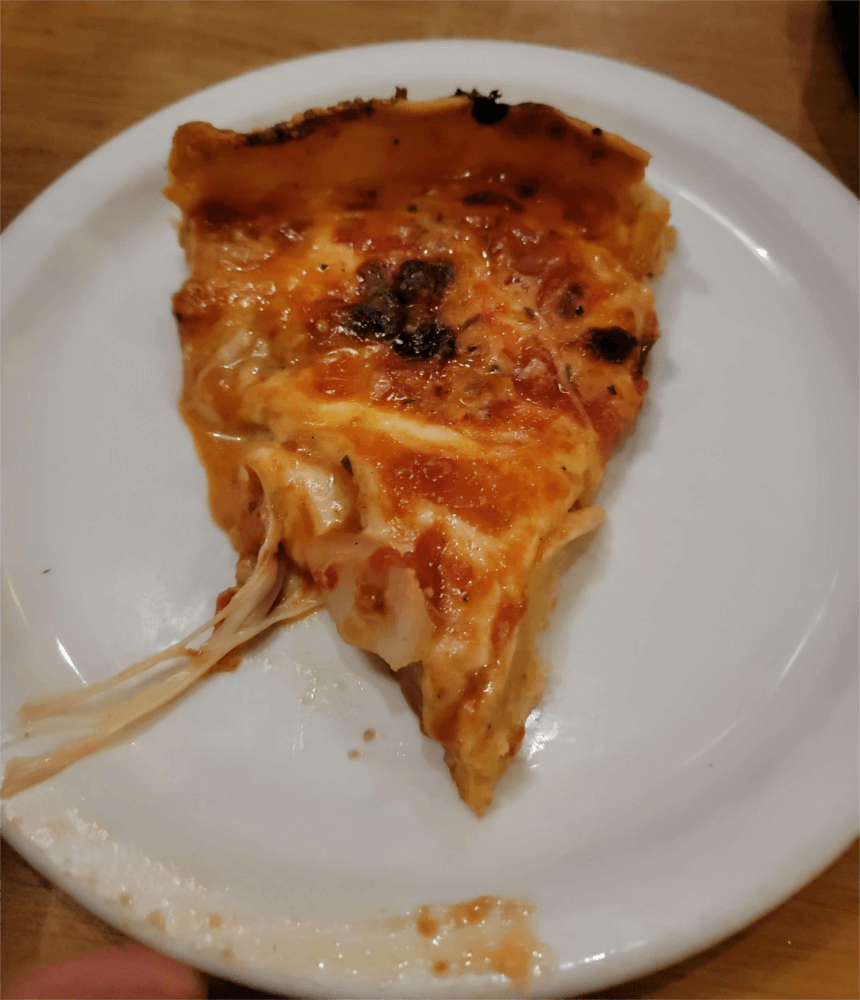 To get philosophical about it, I think that what’s really out there and what we experience might be very different things.  Like how a the experience of a computer screen showing a beautifully drawn graphical user interface never hints at the reality of computer boards directing electrical circuits to represent the information we see. Our notion of reality is a digital simulation instigated by the sensory input interpreted through our senses.

Even under the richest of experiential excitement, without mindfulness there is no participation with, nor illusion of, reality. If you mindlessly read a book, you might as well have not read it. If you day-dream during a movie, you may know as much about the plot as someone who has never saw it. 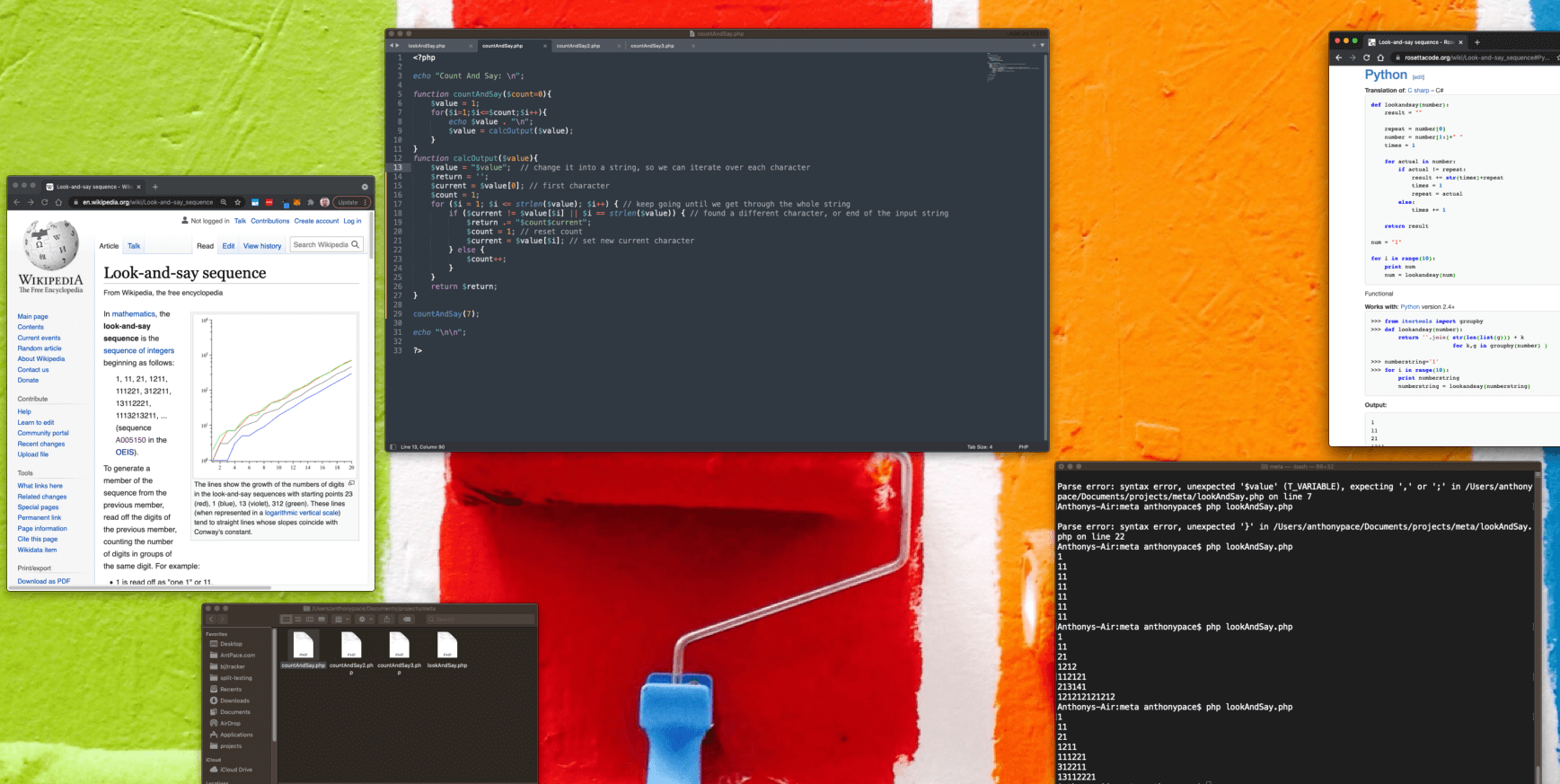 The look-and-say sequence is a series of integers. It can grow indefinitely. It is generated by reciting a number phonetically, and writing what you spoke numerically. Its popularity is attributed to famed cryptographer Robert Morris. It was introduced by mathematician John Conway. It looks like this:

The first line would be pronounced as “one 1”, and then written as “11” on the second line. That record would be spoken as “two 1’s”,  giving us the third line “21”. The greatest individual symbol you’ll ever find in this consecution is a 3.

This topic has lots of trivia, variations, and history that could be dug up and expounded upon. Here, I’ll explain a solution written in PHP to produce this chain of numerals. The input will be the count of how many lines, or iterations, in the series to generate. Below is the code:

I separated my code into two functions. I think this is the best approach. As an exercise, see if you can figure out how to refactor it into one. This could help you to internalize the logic as you write it out for yourself.

The initial seed value is “1”, and that is hard-coded at the top. The for-loop iterates based on the count input parameter. That means the code circles back and re-runs, with updated values, until its internal count (represented by the variable $i ) matches the $count variable passed into countAndSay($count).

The code that we loop over outputs the current sequence value (starting with 1) as its own line (“\n” will output a new line in most programming languages) , and then calculates the next. The function that determines the next line of output, calcOutput($value), takes the current value as an argument.

The first thing we do is cast the integer value passed along into a string. This lets us refer to each character by index – starting at zero – and save it to a variable $current. We start a new $count, to keep track of how many times we see the same digit.

The next for-loop executes for the length of the $value string. On each loop, we check if the $current character we saved matches the subsequent one in that $value string. It is again referenced by index, this time based on the for-loop’s iteration count represented by the variable $i.

If it does match, one is added to the $count variable that is keeping track of how many times we see the same character is a row. If it doesn’t match (or we’ve reached the end of the input), the $count and $current number are concatenated to the $return element. At that point, the $count is reset to 1, and the $current value is updated.

Writing an algorithm to generate the look-and-say (also known as, count-and-say) sequence is a common coding puzzle. You might run into it during a job interview as a software engineer. As practice, see if you can simplify my example code, or even write it in a different programming language than PHP.

Writing is the best way to develop new ideas. It exercises our ability to explain what we mean, what we want, and why. Clear writing is clear thinking.

Putting words down is good for our mind, and is calisthenics for the brain. Forcing ourselves to build coherent, connecting streams of thought flexes mental muscles that we usually ignore. Expression and mutation are two sides of the same coin.

It’s easy to state your opinions at a high level. But once you dig into it, you might realize you haven’t thought it through. At least, not recently. Writing adds flesh to otherwise gaunt stances. It turns shape-shifting clouds into crystals with obvious foundations.

Make it a habit. Turn it into a daily practice. Here are ten tips to develop a writing routine:

It was 2006 and I had just installed WordPress on a web server. I would draft blog posts nightly, before getting ready for bed. At the time I was a philosophy major and wrote prose more than code. That was my first venture into web development and digital marketing. It started with writing.

Writing blog posts and publishing software have a lot in common. For both, “perfect” is the opposite of ready. It’s easy to keep editing your own work. It’s even easier to keep adding half-done features and clutter. That’s why having a plan before you start helps so much. When I write, my first draft tends to be bullet points and a vague outline. The same goes for software. If I’m building something complex, I write comments explaining its functionality before any code. It’s my way of “thinking out loud”, and making sure that what I plan on doing even makes sense.

It’s been over a decade since I’ve maintained a blog. Creative tasks require hard work, lest they bear no fruit. (“Writer’s block is for amateurs”). Problem solving, in its many shapes, is the highest form of creativity. It’s how we build our reality. Modern technology gives us creative leverage through tools, knowledge, and community. We’re being given opportunities to build and create things, to grow and be better, at an unprecedented scale. It’s the best time in history to be CEO of your own life; creative director of your destiny. This also sets the bar higher to stand out.

My plan here is to write regularly, and discuss what I’ve been working on and learning, as well as what’s next. This gives me a chance to explore my thoughts, and prune the branches from which they stem. Hopefully, working at this will help to make me a better storyteller too.

Sometime during the 1950’s television sets had begun to become widely available and fairly affordable. Noting this point as the advent of entertainment focused telecommunications; art had begun to be understood as a trivial distraction to conservative intellectuals. The vegetating trance of the television, typically allowing the mind to enter a state of ‘cruise control,’ could be attributed to the public’s low level of input towards programming. Although the Internet seems to descend from this legacy of infotainment, something quite different is going on. While television preaches endless forms of false happiness through consumerism, the design of the contemporary web aims to facilitate “creativity, information sharing, and, most notably, collaboration among users (Wikipedia – Web 2.0)” This arrangement comprises the core methodology of the Open Source Revolution that is beginning to reshape our traditions and lead us towards a new renaissance of gnosis.

Philosopher Terence McKenna, reminding us that “culture is not your friend (1999),” advises to resist the epistemological disease of autocratic content by creating our own art. Through venues such as Youtube and MySpace, music, art, film, and photography, even mildly entertaining, is now able to draw large audiences and develop into a well received meme. Further, the Wiki archetype has effectively turned the amateur into the expert. McKenna often refers to a revival of the archaic, which is set to take place as a reaction to the patriarchal model of the elite handing knowledge down, and forsaking personal revelation. The proliferation of open source programs, granting users the ability to freely edit and redistribute computer software, manifests the artistic position towards which society must move. The world is shrinking in to a global village thru mass media, and the common majority must take direct control in order to reconnect and reconcile into cosmic consciousness.

The term ‘global village’ is often used metaphorically to describe the internet and World Wide Web. Philosopher Marshall McLuhan predicted that a global village would be tribal in character. The open source operating system Ubuntu, a distribution of Linux (a prime example of free software and open source development), derives its name from the South African philosophical notion of humanitarianism. Interestingly, this juxtaposition of concept and utility represents the new archetype of culture towards which the Open Source Revolution is driving. Projects such as Wikipedia, an open content encyclopedia, are able to maintain their integrity, accuracy, and scope through an effort of community and collaboration. The Open Source Revolution lends new drive to innovation, epistemology, peer support, and ultimately an altruism that trumps the capitalist agenda of elitism. I feel that we must adopt the concept of Open Source as a new organizational model for society.

Should the open source paradigm stay confined to computer software and the internet, or should we move to adopt it as a new model for social organization?

“In a global village where we have instant access to innumerable beliefs around the world, we have come to realize the relativity of what we think”